The seventh planet from the Sun in the solar system. Uranus orbits the Sun at an average distance of 19.2 AU. The planet has a mass 14.5 times the mass of Earth and a radius 4.0 times the radius of Earth. Uranus is a gas planet made of hydrogen, helium, and methane and has no solid surface. The planet’s axial tilt is an extreme 98 degrees, causing one day on Uranus to equal 84 years, equal to the time it takes Uranus to orbit the Sun once. 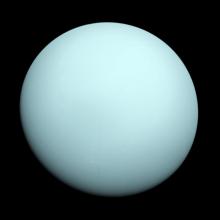 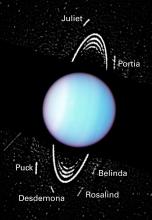