Neptune might be called the mathematicians' planet. German astronomer Johann Galle discovered it on September 23, 1846. The discovery was made possible, though, by the calculations of mathematicians Urbain Leverrier of France and John Couch Adams of England. 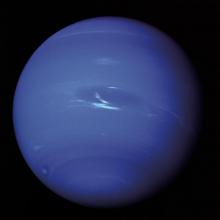 After the discovery of Uranus in 1781, astronomers had a difficult time accurately describing the planet's orbit. Uranus seemed to be pulled by the gravity of an unseen planet. Working independently, Leverrier and Adams calculated the position of such a planet and passed it on to astronomers. When Galle aimed his telescope at that position, he quickly detected the new world.

Galle had discovered the solar system's fourth-largest planet. It is a soothing blue-green orb that looks like a giant marble spinning through space. Its color is the result of methane in its upper atmosphere, which absorbs red light, allowing us to see only the blue end of the spectrum.

Neptune probably has a rocky core wrapped in a layer of frozen water and other ices. The core is fairly large, so Neptune is actually the third most massive planet in the solar system. Traces of other elements form clouds at the top of its thick atmosphere. Neptune's rotation stretches the clouds into bands that completely encircle the planet.

We can't see a lot of features in Neptune's atmosphere, but the features that astronomers can detect appear to come and go in a hurry. When the Voyager 2 spacecraft flew past Neptune in August 1989, for example, it discovered the Great Dark Spot -- a dark, oval-shaped storm system as big as Earth. But when Hubble Space Telescope looked at Neptune five years later, the Great Dark Spot had disappeared.

Voyager also found that Neptune produces more heat than it receives from the Sun. One theory says that a "rain" of liquid hydrogen falls onto the planet's core, releasing heat as it falls.

Several rings of rocky material that is darker than chimney soot encircle Neptune. The most interesting is called the Adams ring, which is named in honor of John Couch Adams. (Other rings are named for Galle and Leverrier.) It is farthest from Neptune's cloudtops, and consists of several large clumps of material connected by a thin band of dust. The ring may have formed when a comet slammed into a small moon, destroying both the comet and the moon. The debris then spread out to form a ring.

Today, this material is merging to form larger clumps. Within about 10,000 years, the ring material may coalesce to form a moon -- a moon reborn from the ashes of its own demise.

Neptune will shine at its brightest for 2022 in mid-September, in the constellation Aquarius. It is far too faint, however, to see without strong binoculars or a telescope.

Voyager 1 and 2 conducted a "grand tour" of the outer planets during the 1970s and '80s. Voyager 1 flew past Jupiter and Saturn, discovering new moons and rings, compiling movies of the motions of both planets' atmospheres, and conducting other observations. Voyager 2 followed the same path, but was then targeted to fly past Uranus and Neptune. Its encounters provided the first detailed looks at both giant planets and their moons. No other spacecraft has flown past either planet. Both Voyagers still operate today, and have detected signs of the "edge" of the solar system.