With the possible exception of Saturn's rings, comets are the most beautiful objects in the solar system. Their lacy tails can spread across millions of miles, giving them an ethereal quality that nothing else can match. 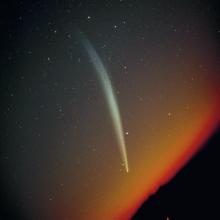 For astronomers, though, a comet's beauty is not just in its appearance, but in its content: A comet is an icy time capsule that contains some of the original material from the cloud of gas and dust that gave birth to Earth and the other planets.

Current theory says that the planets formed as small grains of ice and rock stuck together to form larger bodies, called planetesimals, which then merged to form the planets.

As the planets grew larger, so did their gravitational influence. Encounters with Jupiter and the other giant planets pushed many planetesimals into distant orbits around the Sun.

Many of the planetesimals were deposited in a region known as the Kuiper Belt, named after astronomer Gerard Kuiper, who predicted its existence in 1951. This doughnut-shaped zone begins outside the orbit of Neptune and probably extends two or three times farther from the Sun.

Although no one knew it at the time, the first Kuiper Belt member was discovered in 1930: the planet Pluto. No other member was discovered until 1992, when technological innovations like Hubble Space Telescope, large new ground-based telescopes, and techniques for clearing up the blurring effects of Earth's atmosphere made it possible to detect fainter and more-distant objects. Since then, the census of Kuiper Belt objects has grown to almost 1,000. Most are fairly small, but a handful are half as big as Pluto or larger, making them interesting worlds in their own right.

While the Kuiper Belt may contain tens of millions of leftover planetesimals, far more may reside in a larger zone known as the Oort Cloud. It's named for Jan Oort, a Danish astronomer who first described it in 1950. These objects got a more powerful "kick" from the giant planets, pushing them to distances of up to one light-year into space -- about one-quarter of the distance from the Sun to its closest stellar neighbor. The Oort Cloud may contain hundreds of billions of planetesimals in a "shell" that surrounds the Sun.

The planetesimals in the Oort Cloud and Kuiper Belt probably consist of chunks of rock mixed with frozen water and gases. Astronomer Fred Whipple once described them as "dirty snowballs." This composition explains how a planetesimal makes the spectacular transition that produces a comet.

Occasionally, a member of the Oort Cloud or Kuiper Belt is nudged from its orbit and begins to fall toward the Sun. As it gets close to the Sun, it gets warmer. Some of the ice at its surface vaporizes and spews into space, which also releases tiny particles of rock. This material forms a vast cloud of gas, known as a coma, that surrounds the nucleus. Radiation pressure from the Sun, along with the flow of charged particles known as the solar wind, pushes some of the material in the coma away from the Sun, forming the long, glowing tail that gives a comet both its beautiful appearance and its name: comet is from the Latin word for "hair."

Comets from the Oort Cloud follow long, stretched-out orbits that take them far back into the frigid realm of deep space, while Kuiper Belt comets follow shorter orbits that can bring them close to the Sun every few years. The most famous comet, Halley, is from the Kuiper Belt, because it returns to the inner solar system every 76 years.

Since comets are leftovers from the birth of the planets, they are of particular interest to planetary scientists. Studying comets from close range and getting samples of their material should reveal new details about the materials and conditions that gave birth to the planets.

Comets may have played a big role in the evolution of Earth, too. Many scientists believe that comets supplied much of Earth's water by slamming into our planet billions of years ago. Comets might even have provided the organic compounds that gave rise to life, making them even more intriguing objects for scientific study. 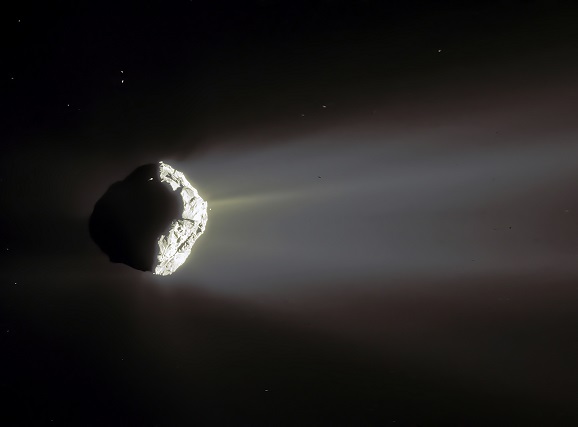 View of 67P/Churyumov–Gerasimenko from Rosetta The most extensive study of a comet to date was conducted by Rosetta, a European mission that flew along with Comet 67P/Churyumov–Gerasimenko for two years, ending in 2016. It photographed features as small as a few inches across, and deployed a small lander (which landed at a bad angle and returned little useful data). A NASA mission, Stardust, flew through the tail of Comet Wild 2 in January 2004. It captured a few grains of dust in the tail and returned them to Earth in 2006. Another NASA mission, Deep Impact, blasted a hole in the surface of Comet Tempel 1 on July 4, 2005, to study the composition of the material that was expelled into space.