Some types of stars expire with titanic explosions, called supernovae. 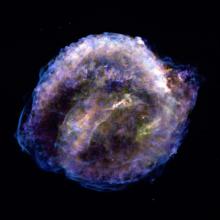 When a star like the Sun dies, it casts its outer layers into space, leaving its hot, dense core to cool over the eons. But some other types of stars expire with titanic explosions, called supernovae. A supernova can shine as brightly as an entire galaxy of billions of "normal" stars. Some of these explosions completely destroy the star, while others leave behind either a super-dense neutron star or a black hole -- an object with such powerful gravity that not even light can escape from it.

Supernovae come in two broad categories, known as Type I and Type II, which are defined by the spectrum of the matter that's ejected into space, and by the way the stars brighten and fade. As more supernovae are discovered, though, the line dividing the two categories is blurring.

The best-known Type I supernovae are known as Type Ia. A Type Ia probably occurs when a white-dwarf star -- the "corpse" of a medium-mass star like the Sun -- is completely blown to bits.

Astronomers suspect white dwarfs as the culprits because Type Ia supernovae typically occur in regions of space that contain mostly older stars, suggesting that a Type Ia is the explosion of a long-lived star. Stars that live a long time cannot be particularly massive, adding credence to the white-dwarf theory. And the spectra of Type Ia supernovae show little or no hydrogen, the most common element in the universe. Instead, they show a lot of carbon and oxygen, which is the composition of a white dwarf.

The most popular theory for turning a white-dwarf star into a supernova is through an act of stellar cannibalism. If a white dwarf has a close companion star, it might steal gas from the companion's surface. If the amount of material accumulated by the white dwarf pushes its mass near the Chandrasekhar limit, the white dwarf might explode, leaving nothing behind. 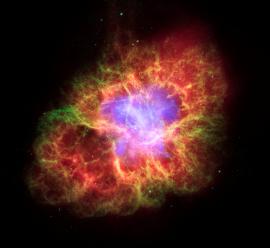 Crab Nebula supernova remnantThe stars that make Type II supernovae, on the other hand, probably are born in a galaxy's spiral arms -- regions that are populated by lots of young, bright stars -- and don't live long enough to wander from their birthplaces. Because they are short-lived, such stars also must be massive.

The brightness of a typical Type II supernova peaks after a week or two and remains nearly constant for up to two months. It then drops suddenly, followed by a steadier dimming over the next few months. The pattern of light emission over time is consistent with the explosion of a "supergiant" star.

A supergiant has progressed through a sequence of stages that produced increasingly heavy elements in its core -- from hydrogen to helium, carbon, oxygen, and so on. But this sequence comes to a violent end once the core is converted to iron. Iron can only absorb nuclear energy, not produce it. Since it can no longer produce energy, the star loses its source of internal pressure and collapses.

When the collapse reaches a critical density it stops. At this point, the matter in the star's core is packed so tightly that a block of its material the size of a sugarcube would weigh millions of tons. The core has become a neutron star -- an object more massive than the Sun, but only a few miles in diameter.

The process of collapse releases enough energy to rip the star's outer layers to bits and blast them into space at several percent of the speed of light. These fragments carry helium, calcium, oxygen, carbon, and other elements into space, where they may someday be incorporated into new stars and planets.

How is a nova different from a supernova? 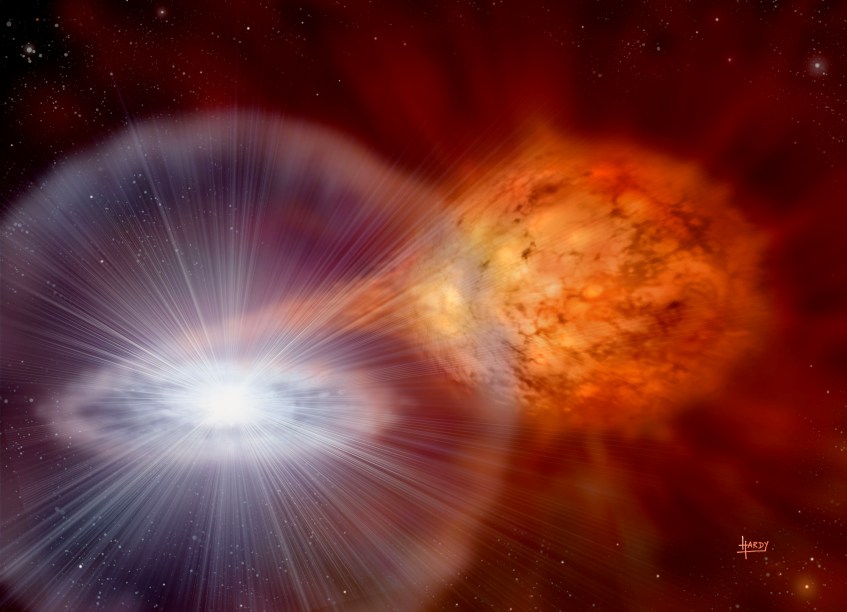 Artist's concept of a nova"Nova" is a Latin word that means "new." In astronomy it's used to describe an object that suddenly shines much more brightly than it had before. Novae occur in multiple star systems in which a white dwarf, neutron star, or even black hole draws gases from the outer atmosphere of a companion star into an envelope of matter around itself.

As more matter is piled on, the gas becomes increasingly hot and dense, until the sudden onset of hydrogen fusion in the envelope triggers an enormous thermonuclear explosion. The star's brightness increases by one million-fold -- enough to make it as luminous as the brightest stars.