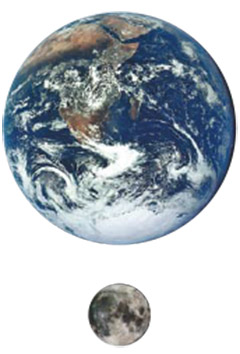 Without being informed of the expected product, the students will make a Play-doh model of the Earth-Moon system, scaled to size and distance. The facilitator will reveal the true identity of the system at the conclusion of the activity. During the construction phase, students try to guess what members of the solar system their model represents. Each group receives different amounts of Play-doh, with each group assigned a color (red, blue, yellow, white). At the end, groups set up their models and inspect the models of other groups. They report patterns of scale that they notice; as the amount of Play-doh increases, for example, so do the size and distance of the model.

Color code each amount of Play-doh: red, 2 cans; blue, 1.5 cans; yellow, 1 can; white, 0.5 can. Divide students into groups of two to four members. Lay out materials for all groups to share in a central location. Distribute Play-doh and one large piece of paper to each group.

Introduce the problem
Tell the groups that they will make a scale model of two members of our solar system. Do not reveal that it is the Earth and Moon — that’s the surprise that makes this activity memorable. Along the way, they can make guesses about what the model represents.

Divide the Play-doh
Tell groups to divide their Play-doh into five equal pieces.

They may use whatever creative and clever means they can think of to solve this problem. Example solution: Roll the Play-doh into a long cylinder, then divide it into pieces. A 50-cm cylinder can be cut into 10-cm lengths, then formed into spheres. Tell groups to divide up one of the larg- er pieces into 10 equal size pieces; set one of these smaller pieces aside.

Create two carefully sized pieces
Tell each group to mash everything together (except the one small piece previously set aside) into one big sphere. Roll the remaining small piece into a little sphere.

Make a guess
After they have made two Play-doh spheres, ask each group to write down three guesses about what these solar system objects might represent. Discuss the guesses with the students. At least one student will guess they are Earth and the Moon. Next, ask them to make a guess of how far apart to put their Earth and Moon spheres to make a true model. A scientist follows up and tests guesses with observations and measurements.

Inspect other models, compare, and analyze
After all the groups have laid out their models, ask everyone to inspect other groups’ models. Discuss the results. Models will differ in three main ways, besides the color of the Play-doh: the relative sizes of the Earth spheres, the relative sizes of the Moon spheres, and the distance between the spheres. But all of these differences are related to the same set of pro- portions. The ratios of Earth diameter:Moon diameter and Earth diameter: separation distance are the same for each model.

The Sun is about 150 million km from Earth. Estimate how many Earth diameters and Earth-Moon distances in your system would be needed to put the Sun in your model. Compare the sizes of the Sun and the Moon’s orbit around Earth.