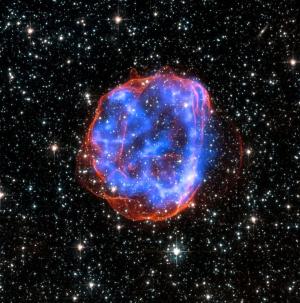 The remains of an exploded star glow brightly in X-rays (blue) and visible light in this composite image from two space telescopes. Known as a supernova, the exploding star produced a torrent of energy and charged particles. If such an explosion happened close to Earth it could zap our planet, perhaps even triggering mass extinctions. Fortunately, no future supernova is within the danger zone. [NASA/CXC/Rutgers/J.Hughes; NASA/STScI]

Several stellar time bombs shine in summer’s evening skies. Among the brightest are orange Antares, the heart of Scorpius, which is low in the southwest at nightfall, and Deneb, the tail of the swan, in the east-northeast. Each star will end its life with a titanic explosion known as a supernova.

These and the other future supernovae are all hundreds of light-years away or farther. That’s lucky for Earth, because if they were too close, they could zap our planet — perhaps triggering mass extinctions. Exactly how close is too close is a matter of debate, but it’s probably not more than about 50 light-years.

Supernovae present several threats, including X-rays, which can zap the ozone layer, and cosmic rays, which trigger showers of subatomic particles that pepper the surface. These particles can cause cancer and genetic mutations. And they can trigger thunderstorms, leading to changes in climate.

A supernova 2.6 million years ago may have caused less-dramatic problems. There’s evidence that an unusual number of species disappeared at that time — not enough to classify as a mass extinction, but more than average. That could have been caused by climate changes or other effects, but it also could have been the result of a supernova.

Researchers at the University of Kansas say the supernova was about 150 light-years from Earth — far closer than any current supernova candidate. So we’re probably safe from these big blasts for a long time to come.