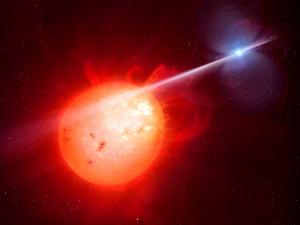 A stellar corpse known as a white dwarf zaps a companion star with a particle beam every two minutes, as shown in this artist's concept. The two stars in the system, known as AR Scorpii, are separated by about twice the distance from Earth to the Moon. As the white dwarf rotates, its magnetic field accelerates beams of electrons to almost the speed of light. As the beams sweep past the companion -- a small, cool red dwarf star -- they heat the other star, causing the system to shine much brighter. [M. Garlick/University of Warwick/ESO]

A stellar corpse in the constellation Scorpius isn’t a good neighbor. It’s blasting a small companion star with a particle beam. That causes the companion to flare up every couple of minutes.

AR Scorpii stands close to Antares, the scorpion’s bright orange heart, which is not far to the lower right of the Moon at nightfall. AR Scorpii is quite faint, though, so it takes a big telescope to spot it.

The system consists of two stars. One of them is a white dwarf — the hot, dense “corpse” of a once-normal star. The other is a red dwarf — a small, cool star that’s still in the prime of life. The two are separated by about half a million miles, which is only twice the distance between Earth and the Moon.

The white dwarf spins once every couple of hours — a fast rate for a white dwarf. It might have spun up by “stealing” gas from its companion. As the gas poured onto the white dwarf, it sped up the star’s rotation like a parent pushing a child on a merry-go-round.

The beams sweep across the companion star every couple of minutes. That zaps the surface of the star, making it much hotter for a few seconds. So AR Scorpii grows noticeably brighter every two minutes — as a dead star zaps its close companion.