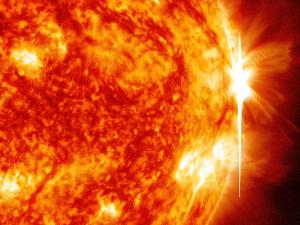 A powerful solar flare erupts in this image from a Sun-watching spacecraft. The flare is an explosion on the Sun's surface, and it produces a torrent of radiation and charged particles. The most powerful flares can knock out satellites, disrupt some radio transmissions, and trigger blackouts. A recent study says that, more than a millennium ago, the Sun produced two outbursts that were more powerful than anything seen in the modern era, while another study says the Sun could produce flares that are even more powerful, threatening extensive damage to our technology. [NASA/GSFC]

Most of the time, the Sun is pretty agreeable. It warms and lights our planet without causing problems. Every once in a while, though, it acts up. It produces intense storms that can knock out satellites and power grids, disrupt radio and air travel, and even mess with Earth’s protective ozone layer.

And there’s evidence that it could do much worse. In fact, a recent study found that more than a millennium ago, the Sun produced two outbursts that were far stronger than anything seen in the modern era.

Scientists had seen hints of these outbursts in tree rings. Big solar storms bombard the atmosphere with cosmic rays. They strike atoms of carbon, beryllium, and other elements in the air, transforming some of them into radioactive forms. Some of these elements reach the ground, where they can be taken up by trees, which preserve them in their annual rings.

But the elements also could have been produced by energy from exploding stars, or by big comets exploding in the atmosphere.

The recent study found radioactive elements like those in the tree rings in samples of ice from Greenland and Antarctica. Researchers say the location, the timing, and the specific elements rule out the other explanations, leaving outbursts from the Sun as the most likely cause.

The biggest outburst came in the years 774 and 5, with the other about two centuries later. Both could have been strong enough to heavily damage our modern technology — damage from the sometimes disagreeable Sun.