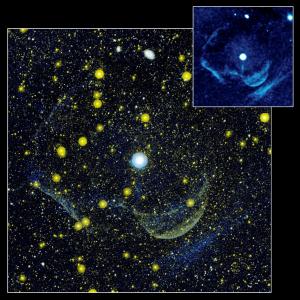 Two views of Z Camelopardalis show an expanding cloud of gas and dust around the star system. The system consists of a dense stellar corpse that steals gas from a "normal" companion star. The gas forms a disk around the dead star. This disk erupts, spewing material into space. There is evidence that it staged a giant eruption at least once within the last thousand years. These views, from the Galex space telescope, show the star and its surroundings at ultraviolet wavelengths. The smaller image has been processed to remove background objects and enhance the view of the cloud around the system. [NASA/JPL-Caltech/M. Seibert (OCIW)/T. Pyle (SSC)/R. Hurt (SSC)]

Once every few weeks, the star system Z Camelopardalis pops off. It quickly flares to about 50 times its normal brightness, then slowly fades. But at least once in the last couple of thousand years, it probably flared thousands of times brighter than its normal outbursts — like the difference between a flashlight and a searchlight. And today, astronomers can still see the residue of that powerful blast.

The system is in Camelopardalis, the giraffe. The constellation is about a third of the way up the north-northeastern sky at nightfall.

Z Cam consists of two stars. One is a white dwarf — the small, dead corpse of a once-normal star. Its companion is much bigger. The stars are so close that the white dwarf “steals” some of the companion’s gas, forming a hot disk around the white dwarf. Every few weeks, the disk collapses onto the white dwarf, creating a bright outburst.

A few years ago, though, astronomers discovered a shell of gas and dust around Z Cam. It spans several light-years, suggesting it’s been expanding into space for a long time.

The shell probably was produced in a much more powerful outburst. Lots of gas from the companion built up on the white dwarf. This material got so hot that it triggered a runaway nuclear explosion, blasting the layer of gas out into space.

The blast was so bright that it might have been visible from Earth. In fact, Chinese astronomers might have recorded it — almost 2100 years ago.