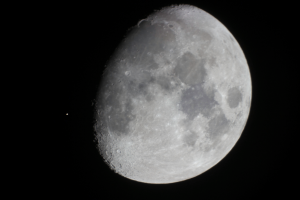 The Moon prepares to cover up the star Aldebaran in this January 19 image from the Smithsonian. The two will repeat this vanishing act before dawn on July 29. [Smithsonian Staff, Phoebe Waterman Haas Public Observatory]

The crescent Moon cozies up to the star Aldebaran before dawn tomorrow. In fact, for those in parts of the United States, the Moon will get especially cozy. It’ll “occult” the star, passing directly in front of it and blocking it from view.

Aldebaran is the bright orange eye of Taurus, the bull. It’s a big, puffy star that’s nearing the end of its life. That puffiness makes it shine hundreds of times brighter than the Sun, which is why it looks so prominent.

Aldebaran lies just a few degrees from the ecliptic — the Sun’s path across the sky. So the Sun passes quite close to Aldebaran each year, at the end of May.

The Moon’s path stays within a few degrees of the ecliptic as well, so the Moon passes close to Aldebaran about once a month. And this month, it gets especially close.

As seen from the United States, Aldebaran will be no more than a degree or two from the Moon as they rise around 2:30 or 3 tomorrow morning. And for a swath of the country from about Illinois down to Texas, Aldebaran will disappear behind the top portion of the Moon’s visible crescent. It’ll remain hidden for anywhere from a few minutes to about an hour, depending on the viewing location. It’ll then reappear from behind the dark portion of the lunar disk.

For the rest of the country, the Moon will just miss Aldebaran, or the occultation will take place after sunrise. Even so, the Moon and Aldebaran will still form a beautiful pairing in the pre-dawn sky.