If you spend some time gazing into a dark night sky, you’ll notice that the stars are all a bit jumpy. They appear to flicker on and off, shift position, and even change color.

To scientists, this bobbing about is called scintillation. To the rest of us, it’s known as twinkling. It has nothing to do with the stars themselves. Instead, it’s caused by Earth’s dynamic atmosphere.

The stars are so far away that we see them as nothing more than pinpoints. As a star’s narrow beam of light enters the atmosphere, it encounters small pockets of air that are at a different temperature and density from the air around them.

These pockets act as lenses — they bend the rays of starlight. So the light from a star zigs and zags as it passes through the atmosphere, making the star to appear to flicker.

Different colors of light are bent at different angles, so a star can also appear to change color. That’s especially true for the brighter stars, which can swiftly change from red to green to pure white. The effect is most pronounced when a star is close to the horizon, where its light must pass through more atmosphere to reach the viewer’s eye.

And you can see this effect for yourself by looking at the bright stars in view this evening. Fomalhaut, the lonely “autumn star,” is low in the south as night falls, for example. And a bit later, the even brighter star Capella rises into good view in the northeast — twinkling fiercely as it climbs into the sky. 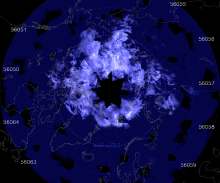