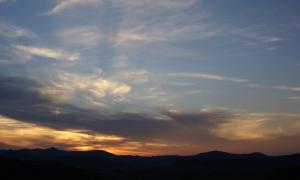 Evening twilight descends on McDonald Observatory and the Davis Mountains of West Texas. This depicts civil twilight, when the Sun is no more than six degrees below the horizon, and the sky is still fairly bright. Full astronomical twilight, when the Sun is between 12 and 18 degrees below the horizon, will come later, providing skies that are dark enough to allow astronomers to begin staring into the depths of the universe. [Damond Benningfield]

Summer arrives on Tuesday night, with the summer solstice. Tuesday and Wednesday will be the longest days of the year here in the United States — the greatest intervals between sunrise and sunset. But the light of day doesn’t begin or end at those moments. Sunlight filters into the sky long before the Sun breaks the horizon in the morning, and long after it disappears in the evening.

These periods are known as twilight. But there are several versions of twilight, all of which depend on how far below the horizon the Sun is.

What most of us think of as twilight is known as civil twilight. In the evening, it begins at sunset and ends when the Sun has dropped six degrees below the horizon — about the width of three fingers held at arm’s length. There’s still light in the sky at the end of civil twilight, but not enough for everyday activities, such as driving.

When the Sun is between six and 12 degrees below the horizon, it’s nautical twilight. When sailors navigated by the stars, they could begin to see stars during this period, but they could also still see the horizon, so it was a good time to take readings.

Finally, when the Sun is between 12 and 18 degrees below the horizon, it’s astronomical twilight. It’s dark enough for astronomers to observe brighter stars and planets, but not dark enough to see faint galaxies and nebulae.

When astronomical twilight ends, the sky’s just about as dark as it’s going to get — the darkness of another night.