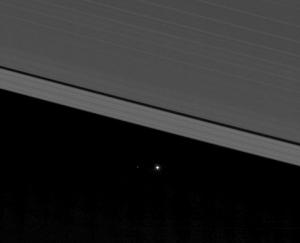 Earth and the Moon are small, glowing dots beneath Saturn's rings in this recent image from the Saturn-orbiting Cassini spacecraft. The Moon is the small, faint dot to the left of the brighter Earth. Cassini is beginning the final phase of its mission in late April, when it makes its first passage between Saturn and the inner edge of its rings. [NASA/JPL/SSI] 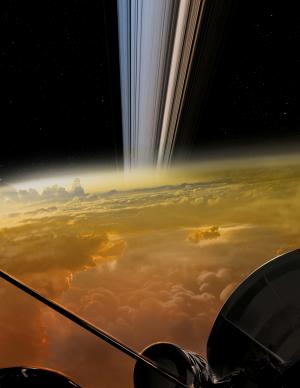 Saturn's rings arc above the Cassini spacecraft while storms in the planet's atmosphere pass below it in this artist's concept of the final phase of the Cassini mission. The craft will fly close to Titan, Saturn's largest moon, on April 21, reshaping Cassini's orbit. Beginning the following week, it will make 22 passes between Saturn and the inner edge of its rings, flying just a few thousand miles above the planet itself. Cassini will end its mission in September by diving into Saturn's clouds, which will destroy the long-operating craft. [NASA/JPL/Caltech]

An amazing mission of discovery is scheduled to enter its final phase tomorrow. Cassini, which has been orbiting the giant planet Saturn since 2004, will change its flight path. The new course will take the craft between Saturn’s cloudtops and the inner edge of its beautiful rings.

Cassini has studied the rings in great detail during its journey. It’s found that the system consists of hundreds or thousands of individual rings. Most of the particles in the rings are made of ice, with a smattering of rock and dust.

Cassini has also discovered many small “moonlets” in the gaps between rings. These bodies are like shepherds tending their flocks; their gravity keeps the ring particles in their proper place.

The innermost ring is fairly thin and faint. Its inner edge reaches to within just a few thousand miles of Saturn itself. Bits of material from this ring probably drop into Saturn’s atmosphere, where they burn up as meteors.

To protect itself against possible impact, Cassini will use its large radio dish as a shield as it plunges through the plane of the rings. That should keep its instruments and electronics safe.

Tomorrow, Cassini will fly close to Titan, Saturn’s biggest moon. That’ll change Cassini’s path, setting up its first loop inside the rings next week. It’ll make 21 more passages over the next five months, leading up to its final act in September: a fatal dive into Saturn’s atmosphere, bringing its mission to an end.