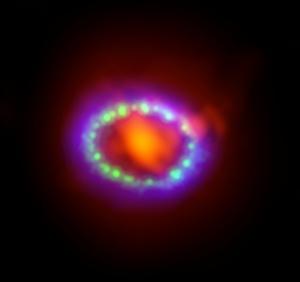 This composite image shows the remains of Supernova 1987A, an exploding star that was first observed in February 1987. The star resided in the Large Magellanic Cloud, a galaxy that's about 165,000 light-years away. Red shows new dust grains forming near the dead star, while blue and green show where the shock wave from the explosion is ramming into a ring of gas around the star. The star expelled the ring long before the explosion. It is clumpy, so many brighter knots of material are embedded within it. This view was compiled in 2014. Astronomers continue to study the supernova, which was the closest and brightest in almost four centuries. [ALMA (ESO/NAOJ/NRAO)/A. Angelich; NASA/ESA; NASA/CXRO]

Astronomers have been hunting a neutron star for 30 years. They know where it is, and they’re almost certain it’s there. Yet they still can’t see it, even with the most powerful telescopes on the ground and in space.

The neutron star would be the remnant of Supernova 1987A, an exploding star that was first seen 30 years ago this week. It’s in the Large Magellanic Cloud, a galaxy that’s about 165,000 light-years away.

At that range, 1987A is the closest supernova seen since the invention of the telescope. That’s allowed astronomers to study it in greater detail than any other supernova.

Their observations have shown that the exploding star was a blue supergiant. That would make it similar to Rigel, the brightest star of Orion, which is high in the south at nightfall, to the lower right of Orion’s three-star belt.

The star exploded when it could no longer produce nuclear reactions in its core. The core collapsed, and the star’s outer layers blasted into space, forming the supernova.

From the mass of the original star, astronomers expected the collapsed core to become a neutron star — a super-dense ball no bigger than a city, but about twice as heavy as the Sun. But despite a diligent search, they haven’t seen a thing. That could mean that the core collapsed even more, forming a black hole. Or it could mean that the neutron star is simply hidden from view — waiting for better observations to reveal its presence.