Comet ISON, near bottom center, blazes toward the Sun in this November 25 image from STEREO-A, a Sun-watching spacecraft. The planets Mercury and Earth are in the shot, as is Comet Encke, which is directly below ISON. ISON will pass about 700,000 miles above the Sun's surface on Thanksgiving Day. If it survives the high temperatures and gravitational stresses, the comet could become visible in the early morning sky by early December. [NASA]

Assuming that it’s held together so far, Comet ISON is headed toward a spectacular and potentially fatal Thanksgiving Day encounter — a plunge near the surface of the Sun. It’ll pass about 700,000 miles above the Sun around mid-day. If it survives, it should put on a nice display in the morning sky beginning in just a few days.

Like all comets, ISON is a big ball of frozen gases and water mixed with rock and dust. As it approaches the Sun, the heat vaporizes some of the comet’s icy surface. That surrounds it with a cloud of gas and dust that can span a hundred thousand miles or more. The Sun pushes some of this material outward to form a glowing tail.

Many comets are basically big rubble piles — chunks of material that are loosely bound together. As they approach the Sun they can fall apart and vaporize — something that happens fairly often.

ISON appears to be fairly large as comets go — about three miles in diameter. And it’s probably making its first trip by the Sun after spending billions of years in the icebox of deep space. Those factors make it tough to predict what will happen as it approaches the Sun.

If it does survive, the extreme heat will vaporize a lot of ice, spewing much more gas and dust into space. So as ISON moves far enough from the Sun for us to see it, it’ll be a pretty sight, with its trail stretching far across the sky — so far that it could be visible in both evening and morning skies. 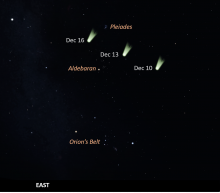