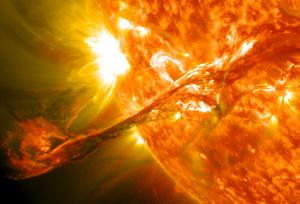 A storm erupts on the Sun in this August 2012 image from a Sun-watching spacecraft. The storm includes a solar flare (bright white are) and a solar prominence (the loop extending above the Sun's surface). If a major storm was aimed at Earth, it could damage much of our electrical infrastructure, causing massive economic damage. [NASA/GSFC]

A major storm on the Sun, however, has the potential to dwarf those losses. A recent study by the American Geophysical Union found that under the right circumstances, a solar storm could trigger economic damages of up to almost 50 billion dollars a day.

The Sun produces storms all the time — big eruptions of charged particles that race outward at millions of miles per hour. Most of the time, these storms miss Earth. But when they do hit, they can knock out satellites, disrupt communications and air travel, and even knock out power grids. In 1989, an especially big storm knocked out power to Quebec.

In recent years, there’s been concern that if a monster solar storm hit Earth, it could knock out power across most of the United States. Not only that, but the currents might fry equipment that could take months to replace. That could leave big chunks of the country powerless for weeks or months.

The recent report looked at the economic impact of such an outage. It found that damages could hit anywhere from a few billion dollars a day, up to 50 billion. About half of that loss comes from a ripple effect that impacts vendors, customers, and others — a major impact from a stormy Sun.