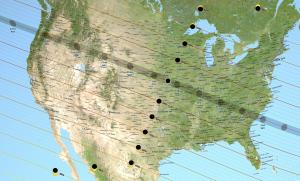 The Great American Eclipse is coming up on August 21. This map shows the circumstances of the eclipse across the entire United States. The path of totality, where the Moon will completely cover the Sun, is a shaded strip from Oregon to South Carolina. [NASA/Scientific Visualization Studio]

Check your tires and your gas gauge and get ready to hit the road for nature’s most spectacular sky show: a total solar eclipse. It takes place a week from today, and will cover a narrow slice of the United States, from Oregon to South Carolina. And be sure to allow plenty of time to get there — millions of Americans are expected to travel to the eclipse path. That should make it the most-viewed solar eclipse in history.

A solar eclipse occurs when the new Moon passes directly between Earth and the Sun, covering the Sun’s disk. Day briefly turns to night, and the Sun’s corona — its hot but faint outer atmosphere — encircles the intervening Moon.

The Moon’s shadow covers a narrow path. For this eclipse, the maximum width will be about 70 miles, over Illinois and Kentucky. That’s where the eclipse will last longest — two minutes and 41 seconds.

About 12 million people live along that path. But almost 90 million live within a couple of hundred miles of that region. So millions of people may travel to see it. In towns near the centerline of the eclipse, where totality lasts longest, the population could triple.

So if you’re among the travelers, eclipse veterans and state highway patrols recommend that you plan your route in advance, leave plenty of time to get there, and check the weather forecast — you don’t want clouds to spoil the most spectacular of all skywatching events.

We’ll have more about the eclipse tomorrow.