The Milky Way galaxy boasts more than just a plethora of stars. It also contains lots of gas, which gives birth to yet more stars. And astronomers are making progress in tracing the story of a remarkable cloud of gas that’s crashing into the Milky Way's disk.

Discovered in the early 1960s by astronomer Gail Smith, the cloud is millions of times as massive as the Sun. It’s about 40,000 light-years from Earth, in and around Aquila, the eagle, a constellation that’s well up in the eastern sky at nightfall. Despite its great distance, Smith’s Cloud is so big that if you could see it, it would span 30 times the diameter of the full Moon.

By measuring the cloud’s velocity and its contents, astronomers recently deduced that it originated in the outer regions of the galaxy’s disk about 70 million years ago. Something shot the cloud out of the disk, and now it’s falling back in.

So far, though, no one knows what gave the cloud its original kick. The explosions of large stars have accelerated other gas clouds, but Smith’s Cloud is much heavier than any of them.

The future of the cloud is clearer. In about 27 million years, it’ll crash into the Milky Way’s disk. The disk holds plenty of gas itself, so the collision should cause gas clouds to slam together. That will squeeze the clouds, causing them to give birth to new stars in a galaxy that already abounds with hundreds of billions of them.

We’ll have more about the Milky Way tomorrow. 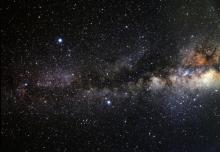