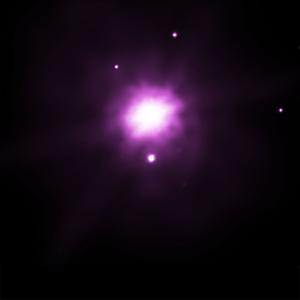 An X-ray image shows hot gas spiraling into a black hole in the Milky Way galaxy. The system, known as VLA J2130+12 (a catalog designation), consists of a black hole a few times the mass of the Sun, and a companion star that is much smaller than the Sun. The black hole pulls gas from the companion, forming a hot disk around the black hole. As this material spirals inward it gets extremely hot, so it emits X-rays. [NASA/CXC/Univ. of Alberta/B.Tetarenko et al]

Astronomers have discovered many black holes that are loud and showy. They’re gobbling gas from companion stars, or even entire stars, which produces a lot of energy, making them easy to find. But a recent discovery is calm and quiet. The black hole is barely feeding at all, so it’s tough to see.

The black hole is known as VLA J2130+12 — a catalog designation that means it was discovered by a radio telescope known as the VLA — the Very Large Array.

At first, it was thought to be a galaxy, far beyond our own Milky Way. But follow-up observations with the VLA and other telescopes found that it’s only 7200 light-years away — well within the Milky Way.

The energy that’s coming from the system means that it probably consists of a black hole that’s a few times the mass of the Sun, and a companion star that’s much smaller than the Sun. The black hole is slowly pulling gas from the companion. The gas forms a thin, faint disk around the black hole. Some of this material trickles into the black hole, slowly increasing its heft.

The system is so far and faint that it’s impossible to see. But you can find its position early tonight with the help of two guiding lights. Orange Mars is in the south-southwest as night falls. And the bright star Deneb is far to its upper right, at the top of the prominent Northern Cross. VLA 2130+12 is about half way between them — a faint black hole slowly snacking on a stellar companion.