The Dog Star and its “pup” are growing apart. And it’s all about family dynamics.

The Dog Star is Sirius, the brightest star in the night sky. It climbs into good view in the southeast by 7:30 or 8, and scampers low across the south during the night.

Sirius has a small, faint companion, known as the Pup. It’s the dead core of a star that was once much bigger, heavier, and brighter than Sirius itself. Because of its showiness, though, the Pup exhausted its nuclear fuel in a hurry. About 120 million years ago, it cast off its outer layers, leaving behind only its core — a white dwarf.

Because the original star was so massive, the Pup is one of the heaviest white dwarfs around — roughly as massive as the Sun. Yet it’s only slightly bigger than Earth, so it’s extremely dense. And it’s still quite hot, so it shines blue-white. Because it’s so small, though, it’s tough to see the Pup through the glare of brilliant Sirius.

Sirius and the Pup orbit each other once every 50 years, at an average distance of almost two billion miles. But their orbit is stretched out, so the distance varies by quite a bit. Right now, the stars are moving farther apart. They’ll reach their widest gap in three years, at about three billion miles — the distance from the Sun to Neptune, the most remote major planet.

After that, the two stars will begin to move closer once again — thanks to the dynamics of a stellar family.

We’ll have more about Sirius tomorrow. 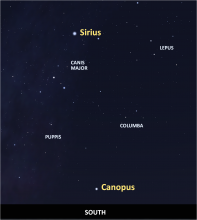