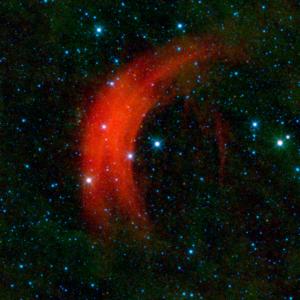 Plowing Through the Galaxy

Alpha Camelopardalis, a giant star in the northern constellation Camelopardalis, the giraffe, rams through the galaxy in this false-color image from WISE, an infrared space telescope. The star blows a thick, strong wind of charged particles into space. The wind collides with clouds of gas around the star, forming a bow shock (the red arc) like that of a ship speeding through the ocean. The shock wave spans several light-years. [NASA/JPL/Caltech/WISE]

The relationship between stars and the material around them — the interstellar medium — is complicated. Stars are born from this material — wispy clouds of hydrogen, helium, and other elements, plus tiny grains of dust. And when stars die, they expel much of their material back into the interstellar medium, enriching it with elements forged inside the stars themselves.

And between birth and death, a star can have a powerful influence on the interstellar medium around it.

An example is the star known as Alpha Camelopardalis. It’s one of the brightest stars of the faint constellation Camelopardalis, the giraffe, which is high in the north on January evenings.

Alpha Cam is probably about 30 times as massive as the Sun. That great heft makes its surface extremely hot, driving a strong “wind” of gas off the surface and into space. This material forms a big bubble around Alpha Cam.

The star is racing through the galaxy at millions of miles per hour. As it plows through the interstellar medium, its wind squeezes the cooler gas and dust ahead of the star, forming a bow shock — like water piling up in front of a ship. The shock wave spans several light-years.

Over time, it’s possible that the shock wave could help compress the interstellar medium enough to give birth to new stars — continuing the complex relationship between the stars and the material around them.

We’ll have more about Camelopardalis tomorrow.