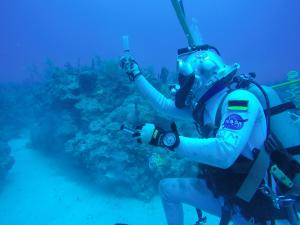 An astronaut conducts experiments on the ocean floor during a recent excursion from Aquarius, a habitat on the ocean floor off the Florida Keys. NASA is preparing for space missions, including trips to Mars, by sending astronauts and scientists to exotic locations here on Earth, including caves, the flanks of a volcano in Hawaii, and others. [NASA]

It’ll be a long time before astronauts journey to worlds beyond our own. But that hasn’t stopped them from making journeys to exotic locations. In the last few months, for example, they’ve spent time inside a cave in Italy, and in a habitat on the floor of the Atlantic Ocean.

These projects are designed to help astronauts and ground controllers prepare for future explorations in space. The crew members gain experience in living and working in unusual environments, where they’re cut off from normal contact with the outside world. And ground controllers learn how to plan and monitor such missions.

Back in July, a team of six astronauts — two from the United States and four from other countries — entered a network of caves in Sardinia. During the week-long expedition, they explored the caves and collected scientific samples. And they conducted daily planning and debriefing sessions, just as they would during a space mission.

And not long after they returned to the light, another crew entered an underwater habitat called Aquarius. It’s 60 feet deep, three and a half miles off Key Largo. Astronauts and technicians tested tools and scientific equipment, and they conducted underwater “spacewalks.” They collected samples and helped with a coral restoration project. And they experimented with a communications time lag that was similar to what astronauts would experience during a trip to Mars — a destination that’s still decades away.