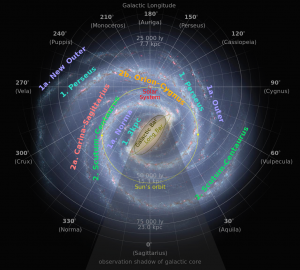 This map shows the major spiral arms of the Milky Way galaxy. Our solar system is at top center, a bit more than half way from the galaxy's center to its edge. Recent research shows that the Scutum-Centaurus arm is one of the longest, wrapping around the entire galaxy. [R. Hurt/Wikipedia]

Our home galaxy is a spiral. We can’t see it from the outside, though, so we don’t know how its beauty compares with the many spirals we see elsewhere in the universe. But astronomers have discovered that one of the Milky Way’s spiral arms may wrap around the entire galaxy, hinting that our galactic home may be especially striking.

Spiral arms contain big clouds of gas that give birth to new stars. Astronomers in China listened for radio signals from this gas. They discovered 48 new clouds in the outer part of the galaxy that lined up with 24 previously known clouds. The clouds outline a previously unknown segment of a spiral arm. The segment spans 30,000 light-years.

The astronomers suggest that the segment may be part of a long arm called Scutum-Centaurus, after two constellations it passes through. The arm starts closer to the galaxy’s center than we are. The arm then winds outward, passing between us and the galactic center before reaching the other side of the galaxy. It then swings back toward our side of the galaxy.

If the new spiral-arm segment really is part of the Scutum-Centaurus arm, then it wraps around the entire Milky Way — a feat seen in few other spirals.

Centaurus is difficult to see from most of the United States, but Scutum is in good view right now. As night falls, it stands to the upper left of teapot-shaped Sagittarius. Under dark skies, you can see that it’s enwrapped in the hazy veil of the Milky Way.