The surface of the largest moon of Saturn looks a lot like Earth, with mountains, riverbeds, lakes, and dunes. But while the dunes on Titan look like those on Earth, they’re really quite different. Their particles of “sand” may form in a different way, and the dunes align in the opposite direction from the prevailing winds.

Titan looks so Earth-like because it has a cold, thick atmosphere. Winds, along with rains of liquid methane and ethane, sculpt the surface — including the dunes. In fact, the grains that make up the dunes may consist of particles of organic compounds that stick together in Titan’s atmosphere and fall to the surface like sleet.

The dunes are found along Titan’s equator. They’re up to 30 stories high and hundreds of miles long.

Most of them point to the east. But climate models suggest that Titan’s prevailing winds are from the west, so the dunes ought to aim in that direction.

A recent study says they may align against the wind because the grains that make up the dunes have an electric charge, so they clump together. Titan’s everyday winds are too weak to move the clumps. At the equinoxes, though, jet streams that move eastward may give birth to big storms. Winds from those storms could be strong enough to sculpt the dunes on this intriguing moon.

Look for Saturn low in the southeast and south this evening. It looks like a bright golden star. Titan is visible through good binoculars or a telescope. 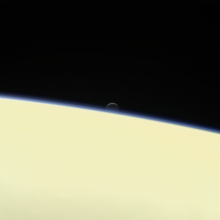