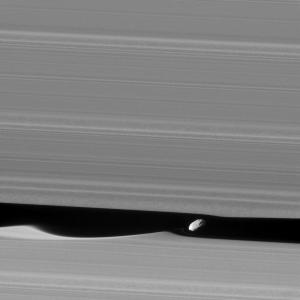 The moon Daphnis, which is about five miles (8 km) long, creates ripples in Saturn's rings as it orbits the giant planet in this January image from the Cassini spacecraft. The gravitational pull of Daphnis and other small moons stirs up the rings, which are quite dynamic. Collisions with ring material can shatter the small moons, but more material can coalesce to form new moons. Ring material rams into the surfaces of some of Saturn's larger moons, blasting out rock and ice which can then join the rings. Geysers on the moon Enceladus also supply an outer ring with fresh ice. [NASA/JPL/SSI]

It’s rare for second place to outshine first. Most of the accolades go to the winner of the NBA Finals or the gold medalist at the Olympics, not the runner-up. Yet among the planets of the solar system, second place is a lot more memorable than first.

That’s because the second-largest planet is Saturn, the most easily identifiable world other than our own. Its bright rings are both beautiful and memorable — the most distinctive feature of any planet or moon.

The rings are made of small bits of ice mixed with chunks of rock and a sprinkling of dust. Scientists aren’t positive just when they formed — whether it was billions of years ago, or much more recently.

But scientists are sure that the rings are dynamic. As small moons orbit within the rings, for example, their gravity pushes the ring material, creating ripples that look like the wake of a passing boat. Small moons are sometimes pulverized by collisions, adding material to the rings. At the same time, ring particles can bunch up to form new moons. And one of the outer rings gets fresh ice from geysers on one of Saturn’s bigger moons.

That helps make Saturn’s rings intriguing as well as beautiful — enhancing the appeal of the solar system’s runner-up.

And Saturn is putting on its best showing of the year this week. It’s low in the southeast as night falls, and looks like a bright gold star. It arcs across the south later on, and remains in view all night.