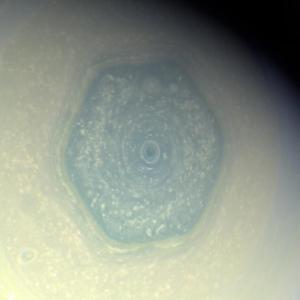 Waves in the upper atmosphere sculpt a giant storm at Saturn's north pole into a hexagonal shape. This true-color view was snapped by the Cassini spacecraft in 2013. Saturn is putting in its best showing of the year in late May and early June, shining like a bright golden star not far from even brighter Mars. [NASA/JPL/SSI]

Just a couple of weeks after Mars was at its dazzling best, another planet is ready to stage its brightest showing of the year.

Saturn, the second-largest planet in the solar system, will reach opposition on Friday night, standing opposite the Sun in the sky. That means it’ll rise at sunset and remain in the sky all night. It’ll also be closest to Earth shortly after opposition, so it’ll shine brightest for the year.

You don’t have to wait for Friday to see the planet, though. Look for it low in the southeast after darkness falls the next few nights, shining like a bright golden star. It’s well to the lower left of much brighter Mars, which is still putting on quite a show. The two arc low across the south during the night.

In all the night sky right now, only the Moon, Mars, Jupiter, and a couple of stars clearly outshine Saturn.

The giant planet soon will begin a gradual fade. When it disappears in the Sun’s glare around Thanksgiving, it’ll be only about half as bright as it appears this week.

We’ll have more about Saturn tomorrow.