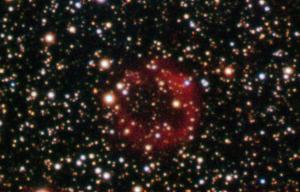 A star in Sagittarius, known as Sakurai's Object, has undergone a "rebirth" of sorts, as it produced an intense outburst a couple of decades ago. The outburst took place when the star began "burning" a shell of helium surrounding its hot, dead core. Known as a "final flash," it produced a strong wind of gas that has surrounded the star with a glowing ring, as shown in this image from the European Southern Observatory. [ESO]

A dying star in Sagittarius isn’t going quietly. A couple of decades ago, it was “reborn” with an intense outburst of energy. It’s faded from view since then, but it’s starting to return.

Sakurai’s object long ago used up the hydrogen fuel in its core, triggering a series of changes. Those changes culminated when the star expelled its outer layers of gas into space, forming a glowing bubble. That left only its hot core, made of carbon and oxygen topped by thin shells of hydrogen and helium. The core was cooling off to form a white dwarf — the final phase of life for stars that are similar to the Sun.

In the 1990s, though, Sakurai’s object flared up — it grew more than 10,000 times brighter. That’s because it was going through a phase called a “final flash”: There was enough helium to ignite a new series of nuclear reactions at the star’s surface.

The new reactions produced a strong “wind” of gas. As this material surrounded the star, it cooled and clumped together to form a cloud of dust. That blocked the star’s light, so it vanished from view.

Today, though, the dust is getting thinner. That’s allowed astronomers to start watching it again. In fact, they’ve seen that it seems to be blowing giant bubbles into space from above its poles — a final act for a dying star.

Although we can’t see the star, we can see its location. It’s above the “teapot” formed by the brightest stars of Sagittarius, which is low in the south at nightfall.