The effort to understand conditions on Mars leads researchers to some of the most extreme environments on Earth, including Chile's Atacama Desert. Although no plants or animals live in the desert's super-dry core, microscopic organisms exist beneath a crusty varnish on some rocks, which may be like some rocks on Mars. Studying the Atacama rocks will help scientists design experiments to look for microscopic life in Mars rocks. [Kim Kuhlman]

If you've ever hiked across a desert, you've probably seen them -- reddish-brown or black rocks that look like they have a glossy coating -- almost like they've been varnished.

Well, it turns out that some of them have. They're coated with clay and manganese -- a mixture known as rock varnish.

Similar rocks may have been seen in pictures from the surface of Mars. That could have important implications for life there, because rock varnish could be formed by bacteria.

KUHLMAN: Because it has so much manganese in it, people like to think that it's got to be formed by biology, because biology is the only thing we know that can concentrate manganese to that level. Plants are full of manganese, relatively speaking. But there's a large part of the community that thinks it's an abiotic process, and that there are other ways that manganese can be deposited.

Kim Kuhlman is a researcher with the Planetary Science Institute. She's studying varnish on Earth rocks -- especially from Chile's Atacama Desert, the dryest place on Earth -- to help figure out just how it forms, and to devise ways to study it on Mars.

Her studies show that rock varnish is a good habitat for microscopic life -- a shield against radiation and other threats.

KUHLMAN: The one thing I do know, especially with the Atacama sample, is that varnish is a niche environment that bacteria like to live in. From that standpoint, it is a target for looking for life on Mars. 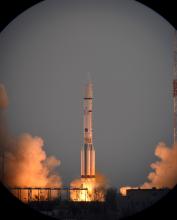