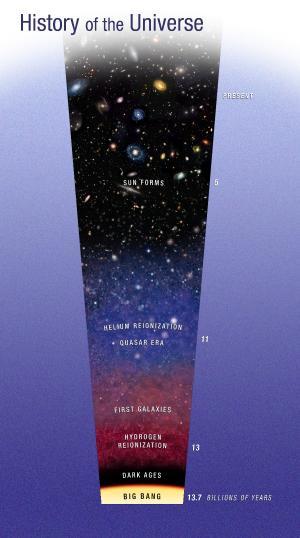 This chart illustrates several key stages in the early evolution of the universe. One of those stages was the epoch of reionization, near the bottom of the diagram, which took place about a billion years after the Big Bang. Energy from newborn stars and galaxies zapped hydrogen atoms, splitting apart their protons and electrons. This made the universe transparent to radiation, ending the earlier epoch, known as the Dark Ages. [NASA/ESA/A. Feild]

A few hundred million years after the Big Bang, the universe got a real charge. The light from the first brilliant stars and galaxies ripped apart the hydrogen atoms that filled the cosmos, giving them an electric charge. That ended the cosmic Dark Ages, and began a new era, known as the Epoch of Reionization.

For its first few hundred thousand years, the universe was so hot that protons and electrons couldn’t stick together to make hydrogen atoms. So the hydrogen consisted of bare protons, which have an electric charge.

As the universe expanded, though, it got cooler, allowing the protons and electrons to join. The complete hydrogen atoms had no charge. Since they were neutral, they produced no light. And they had not yet come together in massive numbers to form stars. So the universe was dark.

And it stayed dark for a few hundred million years, until enough of the hydrogen had clumped together to make stars. Many of these early stars were big and hot, so they produced a lot of ultraviolet energy. And so did the first galaxies, which contained many hot stars. The U-V zapped the surrounding hydrogen, breaking the atoms apart — and reionizing the universe.

As more stars and galaxies formed, they zapped ever-larger volumes of space. By perhaps a billion years after the Big Bang, the job was done. Almost all of the hydrogen atoms had been split apart — “re-charging” the universe.

We’ll have more about reionization tomorrow.