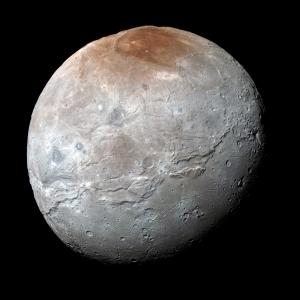 An enhanced-color image of Charon, the largest moon of Pluto, snapped in 2015 by the New Horizons probe, reveals a reddish cap at its north pole. The material at the pole probably contains methane from the surface of Pluto that has been altered by exposure to sunlight and other processes. Charon is about 750 miles (1,250 km) in diameter. [NASA/JHUAPL/SWRI]

Pluto’s biggest moon is the fashion plate of the outer solar system: It’s topped by a red “beanie cap” — a possible gift from Pluto.

Charon is roughly 750 miles in diameter — about half the size of Pluto itself. The New Horizons spacecraft, which flew past Charon last year, found that its surface is marred by long, deep cracks. They may have formed when an underground ocean of water froze and expanded, fracturing the layers of ice above it.

New Horizons also found that the region around Charon’s north pole is darker and redder than the surrounding landscape. And a recent study proposed one possible explanation: it’s contaminated by material from Pluto.

Pluto’s surface consists mainly of frozen nitrogen and methane. Some of these ices vaporize, and a tiny fraction of them eventually escape into space. Charon sweeps up a bit of this material, which settles at the poles — especially at the winter pole, where it’s dark and cold.

When the winter pole emerges into daylight, sunlight creates chemical reactions that convert some of the nitrogen and methane to tholins — organic compounds that look orange or red. Most of the remaining nitrogen and methane ices then vaporize, leaving a thin layer of tholins.

New Horizons saw the red cap at Charon’s north pole, where it’s summer. But there are hints that the south pole, which is cloaked in the darkness of winter, is also topped by tholins — compounds that may give Charon two red beanie caps.