Ready for the Eclipse 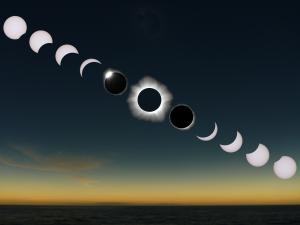 Anatomy of an Eclipse

Day will briefly turn to night for parts of the United States on August 21 during a total solar eclipse. The Moon will completely cover the Sun's disk, blocking the sunlight but allowing the Sun's pearly outer atmosphere, the corona, to shine through. This multiple-exposure image shows the entire sequence of an eclipse as the Moon slowly encroaches on the Sun's brilliance, covers the Sun (center), then retreats. While the total eclipse is safe to look at with the eye alone, the Sun is still so bright at all other phases of the eclipse that looking at it without proper protection can result in eye damage. [Rick Fienberg/TravelQuest International/Wilderness Travel]

For millions of skywatchers in the United States tomorrow, day will briefly turn to night as the Moon passes in front of the Sun, eclipsing its light. The Sun’s outer atmosphere, the corona, will shine silvery-white around the dark Moon. And the stars and planets will shine through the dark as well.

Regulus, the heart of the lion, will perch closest to the Moon. It’s usually lost from view at this time of year as the Sun crosses Leo’s borders. The planet Mercury will shine brightly a little farther away, with reddish Mars on the other side of the Sun.

Brilliant Venus and Jupiter will be farther from the Sun, with Sirius, the brightest star in the night sky, low in the southwest.

You may be tempted to shoot pictures and videos throughout the show. But a total solar eclipse is a once-in-a-lifetime experience, so most veterans say it’s best to simply drink in the spectacle. And it’s one that involves most of your senses — the air will get cooler, and you’ll hear the sounds of birds and other animals preparing for night.

There are a few safety tips to keep in mind. It’s completely safe to look at the Sun when it’s fully eclipsed, but not at other times; it’s so bright that it can damage your eyes. And highway patrols around the country remind drivers not to stop on busy highways. Instead, find a park or some other safe spot to enjoy the sights and sounds of this amazing lightshow.

We’ll have more about this skywatching spectacle tomorrow.