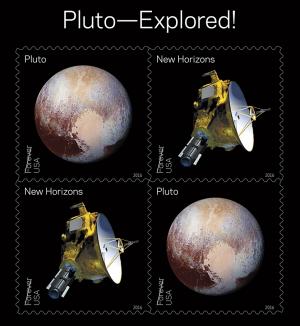 The United States Postal Service will debut this panel of stamps at a conference that begins May 28. The stamps commemorate the New Horizons mission's successful encounter with Pluto in July 2015. A famous stamp issued in the 1990s noted that Pluto was "not yet explored." [USPS]

A 1991 postage stamp has boldly gone where no stamp had gone before — to the edge of the solar system and beyond. The stamp was part of a set that depicted all nine of the solar system’s official planets. American spacecraft had explored eight of those worlds, but Pluto hadn’t yet received a visit. So the stamp featured a painting of a spacecraft flying past the remote planet, with a simple legend below: “Not yet explored.”

Pluto — now known as a dwarf planet — got its first visitor last July. In addition to cameras and other scientific instruments, New Horizons carried several small trinkets from Earth — including the 1991 stamp.

With Pluto finally explored, supporters petitioned the U.S. Postal Service to produce an updated Pluto stamp to celebrate the encounter. The Post Office has gone them one better. At a conference that begins tomorrow, it’ll debut two Pluto-themed stamps, presented under a title that proclaims “Pluto — Explored!” One of the stamps shows New Horizons, while the other features one of its pictures of Pluto.

Those aren’t the only space-related stamps to debut this year. Back in February, the postal service issued a round stamp that shows the Moon. At the upcoming conference, it’ll introduce a set of eight stamps featuring colorful images of the solar system’s major planets. And later, it’ll beam down a block of four stamps to honor the final frontier — commemorating the 50th anniversary of Star Trek.