And last year, they revealed the discovery of another stage in that baking process: M&M-sized nuggets that will smash together to make larger bodies.

The nuggets are in DG Tauri, a star system in the constellation Taurus. It’s about 450 light-years away. And it’s only a couple of million years old, so there probably hasn’t been enough time for planets to form.

Using a network of radio telescopes in England, though, a team of astronomers found a possible planet in the making. It consists of a ring of pebbles that are at least a centimeter wide. The pebbles probably assembled from dust grains around the newborn star. The pebbles may eventually merge to form bigger bodies — the size of comets and asteroids. Those bodies may then come together to form a planet.

The ring of pebbles is about as far from DG Tauri as the giant planet Jupiter is from the Sun. So it’s possible that in a few million years, a fully cooked giant planet may encircle the young star.

And Taurus spreads out above and to the left of the Moon this evening. The Moon will pass close to the bull’s brightest star, Aldebaran, tomorrow night. More about that tomorrow. 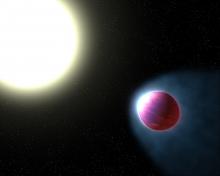