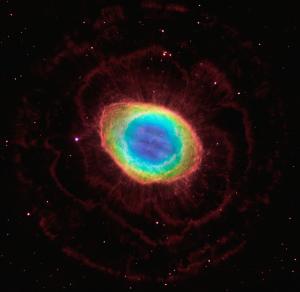 A multi-wavelength image shows the Ring Nebula, the last gasp of a dying star. As the nuclear reactions in its core began to slow down, it started blowing strong winds into space, which form the dark red rings and arcs, shown in infrared light. Later, the star began expelling its outer layers in bulk, forming the brighter doughnut-shaped structure at center. Different colors show different chemical elements: red is hydrogen, for example, while blue is oxygen. The expanding nebula probably is shaped like a barrel, and we're looking through its open end. In a few thousand years, the nebula will dissipate, leaving only the star's hot but dead core, known as a white dwarf. [NASA/ESA/C.R. Robert O’Dell (Vanderbilt)/G.J. Ferland (Kentucky)/W.J. Henney and M. Peimbert (UNAM)]

When a Sun-like star dies, it leaves a brilliant corpse — a glowing shell of gas that can look like a ring, a box, or even an hourglass. The colorful object doesn’t last forever, though — it slowly fades from sight.

Such a beautiful corpse is known as a planetary nebula — not because it has anything to do with planets, but because it can look like a planet when seen through a telescope. And one of the brightest and best known is in good view at this time of year.

The Ring Nebula is not far to the lower right of the brilliant star Vega, which is about halfway up the eastern sky at nightfall.

Long-exposure images show an oval that’s bright red and yellow on the outside, and pale blue and green in the center.

The nebula began forming several thousand years ago, as its star stopped producing nuclear reactions in its core. The core began to shrink and get much hotter. A couple of thousand years ago as seen from Earth, radiation from the core began pushing away the star’s outer layers. As they expanded into space, energy from the superhot core caused them to glow — forming the Ring Nebula.

The nebula is probably shaped like a barrel or a thick doughnut, and we’re looking straight through the hole in the middle. Other planetary nebulae may have companion stars that sculpt them into more exotic shapes, from hourglasses to butterflies — creating beautiful final acts among the stars.

We’ll talk about the possible birth of a planetary nebula tomorrow.