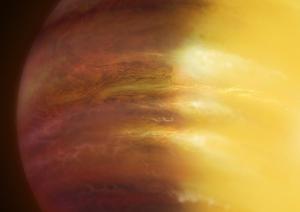 Clouds made of the mineral that makes up rubies and sapphires may swirl through the blazing hot atmosphere of HAT-P-7b, a giant planet in another star system. The planet and its star are only a few million miles apart, and the planet is locked so that the same hemisphere always faces its star. That makes HAT P-7b extremely hot, and its atmosphere dynamic. Clouds observed at the top of the atmosphere, and visualized in this artist's concept, probably are made of solid particles, which rain toward the surface, creating a shower of gems on a distant world. [Mark Garlick/University of Warwick]

If you love gemstones, scientists have discovered a couple of worlds that might be just right for you. One of them probably has a layer of garnet below its crust. And the other may have clouds composed of the mineral that makes up rubies and sapphires.

Kepler 407b is a dense, rocky world like Earth. It’s about the same size as Earth, but up to three times heavier. It orbits a star that’s almost identical to the Sun.

The other planet is HAT-P-7b. It’s bigger and heavier than Jupiter, the giant of our own solar system. But it’s only a few million miles from its star. At that range, the planet is not only extremely hot, but it’s locked so that the same hemisphere always faces the star.

Like Jupiter, the planet is probably a big ball of gas, with clouds atop its atmosphere. Although no one has seen the clouds, they have detected bright spots moving across the planet — cloud banks moving from the nightside, where they form, to the hotter dayside.

Those clouds are so hot that they probably are made of solid particles, including the mineral that makes up rubies and sapphires. As the clouds move into daylight, those particles “rain” back into the giant planet’s atmosphere — a shower of gems on a distant world.