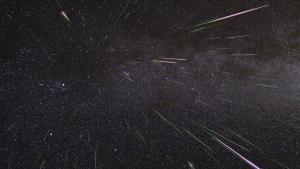 Many Perseid meteors blaze across the sky in this time-lapse image from 2009. The shower is expected to peak the night of August 11 this year, with some experts predicting an outburst of up to 150 meteors per hour at some locations. [NASA/JPL]

The Perseid meteor shower is underway, building toward its expected peak tomorrow night. And the Moon sets early enough to provide several hours of dark skies for watching the fireworks.

Like all meteor showers, the Perseids are caused by debris from a comet slamming into the upper atmosphere. The bits of comet dust vaporize, forming the glowing streaks known as meteors.

The link between comets and meteor showers was first made 150 years ago — a link the Perseids made clear.

The Perseids began perking up in the early 1860s, staging displays of between 100 and 200 meteors an hour. In 1866, Italian astronomer Giovanni Schiaparelli — who later touched off the debate about “canals” on Mars — computed the orbits of the particles that spawned the Perseids. He noticed that they followed the same orbit around the Sun as Comet Swift-Tuttle, which had passed near Earth in 1862. Schiaparelli concluded that the comet was the source of the meteors — the first time anyone had connected a comet to a meteor shower.

After its 1862 encounter, Swift-Tuttle disappeared, and for more than a century no one knew where it was or when it would come back. It finally returned in 1992, reinvigorating the Perseids.

The comet will next visit our part of the solar system in the twenty-second century. But it was 150 years ago that astronomers first discovered that comets cause meteor showers — something to think about as you watch for Perseid meteors.