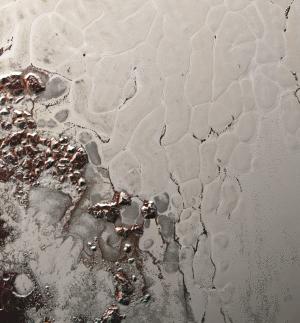 An enhanced-color view of Pluto shows a region where warm material bubbles up from below, forming new crust. Scientists with the New Horizon mission, which flew past Pluto on July 14, 2015, compare the process to a lava lamp, with large blobs of material moving to the surface while others sink back below the crust. This image spans about 250 miles. [NASA/JHUAPL/SWRI]

Pluto’s atmosphere is vanishing from sight. Much of it is freezing, adding new ices to Pluto’s surface. Over periods of millions of years, though, the atmosphere may get thick enough and warm enough to allow liquid to form on the surface — not water, but liquid nitrogen.

That’s among the many findings from New Horizons, a spacecraft that flew by Pluto last July. A year later, mission scientists have pieced together new details on Pluto’s atmosphere and surface, and on its history. But the picture is still incomplete. Because of Pluto’s great range, New Horizons won’t transmit the last of its readings to Earth until autumn.

So far, those readings have shown that much of the surface consists of frozen water — the equivalent of bare bedrock here on Earth. Some regions, though, are coated with ices made of nitrogen, methane, and carbon monoxide. These materials may periodically vaporize into the atmosphere, then condense on the surface as frost.

Over millions of years, Pluto’s tilt on its axis varies by quite a lot. That means the temperature varies as well. When Pluto is at its coldest, the atmosphere is quite thin. But when the little world warms up, the atmosphere gets much thicker — perhaps up to 30 percent as dense as Earth’s. Under those conditions, liquid nitrogen might flow across the surface, forming channels and ponds. In fact, New Horizons saw evidence of dry channels and frozen ponds on Pluto today — possible relics from a warmer past.