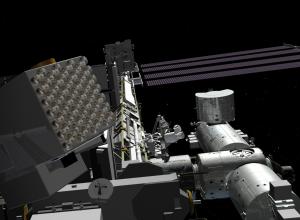 A 'Nicer' View of the Sky

A new X-ray telescope that's scheduled for launch as early as April will study the crushed corpses of once-mighty stars. NICER (Neutron Star Interior Composition Explorer) will attach to the International Space Station, as shown in this artist's concept. The payload (box at left) consists of 56 X-ray detectors. [NASA]

It’s been half a century since astronomers discovered the first neutron star. During the intervening decades, they’ve pieced together the story of what neutron stars are and how they form. But some of the details are still unclear.

A space telescope that’s scheduled for launch to the International Space Station as early as next month should eliminate some of the mystery. In particular, it’ll reveal the sizes of neutron stars more precisely than ever before. That will help astronomers eliminate some models of how neutron stars are put together.

NICER — the Neutron Star Interior Composition Explorer — will take a look at many known neutron stars, and discover many more. Its 56 X-ray detectors will measure how quickly the X-ray light from neutron stars changes, as well as the intensity of light across the X-ray spectrum.

We’ll talk about the birth of a neutron star tomorrow.