The next big space telescope, James Webb, is being prepared for launch next year. And the one after that, which will look like a twin of the venerable Hubble telescope, is being developed.

Yet even these instruments will leave many questions unanswered. So NASA is already planning the next generation of space telescopes. They’ll be bigger than anything launched before, and provide capabilities far beyond Hubble or Webb.

A year ago, NASA picked four teams to outline concepts for the next big space telescope. They’ll keep at it for two more years. After that, the National Academy of Sciences will review the ideas and recommend which one to develop.

One telescope would be like a super-sized version of Hubble. It would use a segmented mirror that could be as tall as a five-story building to look at a wide range of wavelengths. That would allow it to detect signs of life on planets in other star systems and watch the evolution of galaxies and black holes.

Another concept would also provide details on other planets. It could photograph planets in Earth-like orbits, and monitor their atmospheres for signs of life.

The other ideas would look only at wavelengths that are invisible to the human eye. That would allow them to study the earliest galaxies, or the disks of superhot gas around black holes.

All of this will take time, though. Whichever concept NASA eventually picks, the telescope won’t launch until at least the 2030s. 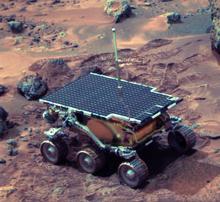