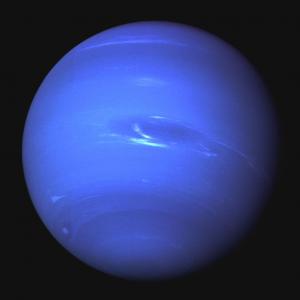 Neptune, the most remote of the Sun's eight major planets, is a giant blue marble, as shown in this view from the Voyager 2 spacecraft. A dark storm, known as the Great Dark Spot, whirls through the planet's clouds in this image, which was snapped in 1989, but has since disappeared. Methane in Neptune's upper atmosphere absorbs red wavelengths of light, allowing only the blue to shine through. [NASA/JPL]

Planet Earth is sometimes described as a Blue Marble — a beautiful sphere of blue and white spinning around the Sun. But another world in the solar system is even bluer: Neptune, the most distant of the Sun’s eight major planets. It’s almost entirely blue, with no continents and almost no white clouds to alter the color palette.

Neptune is shining at its brightest right now. The planet is at opposition — it lines up opposite the Sun in our sky. It rises around sunset and is in view all night, in the constellation Aquarius. It’s almost three billion miles away, though, so at a minimum you need strong binoculars to see it. And you need a telescope to detect its blue color.

Neptune is the fourth-largest planet in the solar system — almost four times the diameter of Earth. It probably consists of a heavy core of rock surrounded by layers of ice and gas. It’s topped by a thick atmosphere that’s rich in water vapor, ammonia, and other compounds. Methane in the top of the atmosphere absorbs red wavelengths of light, allowing the blue to shine through.

Most of the blue is a beautiful shade somewhat darker than turquoise. Bands of clouds sometimes form streaks that are brighter or darker. And large high-pressure systems are sometimes seen to form ovals of dark blue; we’ll have more about that tomorrow. These colors make Neptune one of the most beautiful worlds in the solar system — a blue marble spinning far from the Sun.