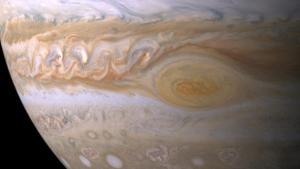 Bands of clouds form beautiful swirls and loops around Jupiter's Great Red Spot in this image from a spacecraft. Clouds in some of the bands extend much higher than those in adjoining bands. Jupiter's cloud layer is hundreds of miles thick. Because the giant planet has no solid surface, scientists define its "surface" as the depth in the atmosphere where the pressure equals the surface pressure on Earth. This depth is well below the tops of the clouds in some of these colorful bands. [NASA/JPL/SSI]

Anyone who’s concerned about their weight might not want to visit Jupiter. The giant planet’s surface gravity is more than twice as strong as Earth’s. So a person who weighs 150 pounds on Earth would weigh about 380 pounds on the surface of Jupiter.

Of course, Jupiter doesn’t actually have a surface for you to stand on. The planet is a big ball of gas, with nothing solid until you penetrate tens of thousands of miles below its cloudtops.

For comparison purposes, though, scientists have come up with a definition for the “surface” of Jupiter and the solar system’s other gas-giant planets. It’s the depth in the atmosphere where the pressure is equal to the surface pressure on Earth.

That’s many miles below the tops of Jupiter’s highest clouds, which are made mainly of ammonia. But there are zones in the atmosphere where the clouds aren’t nearly as high, so the “surface” isn’t necessarily below the clouds.

All of this means that no one will ever walk on Jupiter. It might still be possible to visit the planet, though. Visitors could float through the atmosphere in balloons or blimps, or cruise in specially designed aircraft. But the seats would need to be very well padded — to handle the passengers’ extra weight on the solar system’s largest planet.