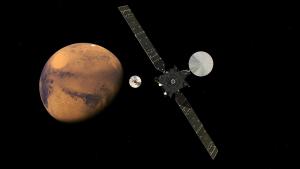 ExoMars, a joint project of the European and Russian space agencies, appears to have achieved mixed results at Mars. Trace Gas Orbiter (at right in this artist's concept) successfully entered orbit on October 19, and will spend a year refining its orbit before beginning full science operations. It is designed to sniff out traces of methane and other gases that could have a biological origin. Engineers lost contact with the other half of the mission, the Schiaparelli lander (at left, shown shortly after separation from the orbiter), moments before its scheduled landing. The lander is a technology demonstrator for a future Mars rover. If ground controllers can regain contact, it is scheduled to operate for only a few days before its batteries die. [ESA/ATG Medialab]

In four years, the European Space Agency plans to send a rover to Mars. It’ll be the agency’s most ambitious planetary mission yet; the rover will drill into the Martian surface to hunt for signs of life.

The mission team hopes to get in a rehearsal for the rover’s landing this week. A probe is scheduled to land on Mars on Wednesday. It has limited battery power, so it’ll last for only a couple of days. But it’ll provide experience at landing on Mars, and check out some of the equipment for the rover mission.

The probe is half of a larger mission called ExoMars. It was launched by a Russian rocket earlier this year.

The other half of the mission is known as Trace Gas Orbiter. It’ll enter orbit on Wednesday, then spend the next 14 months lowering its altitude before beginning its observations.

Its mission is to sniff the upper atmosphere for gases that are related to life, especially methane.

Most of the methane in Earth’s atmosphere comes from living organisms. And traces of methane have been detected in the atmosphere of Mars. That suggests that microscopic organisms could be living below the Martian surface.

But the methane could also be produced by geologic processes instead of life. The instruments aboard Trace Gas Orbiter are designed to determine which is the case — perhaps telling us whether the future rover is likely to find signs of life below the Martian surface.