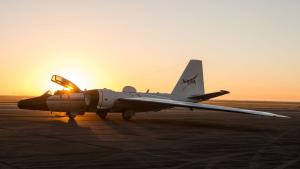 The Sun sets behind a NASA research aircraft, a WB-57F Canberra, at its base near Houston. Two of NASA's three Canberras will chase the Moon's shadow during the August 21 total solar eclipse. They will carry instruments to monitor the Sun's corona, its hot outer atmosphere. They also will study the planet Mercury, which will become visible during the eclipse, and scan the space between the Sun and Mercury for small asteroids, known as Vulcanoids. [NASA/JSC]

The B-57 Canberra has been taking to the skies since the Korean War. Today, only three of the aircraft remain. All three fly research missions for NASA. And on Monday, two of them will be chasing the shadow of the Moon during a total solar eclipse.

The aircraft will conduct experiments for the Southwest Research Institute in Colorado. They’ll look at the Sun’s outer atmosphere, known as the corona. It’s so faint that it’s visible only during a total eclipse. But it’s extremely hot, and astronomers aren’t sure just why.

They’re pretty sure it’s caused by the Sun’s magnetic field. But just how that works is being debated.

The twin Canberras will carry high-speed video cameras to capture detailed images. Those pictures could reveal any waves that might be rippling through the corona. An infrared telescope will map small regions of the corona. And another instrument will capture the light from electrically charged atoms of iron. The iron outlines the magnetic field, which can form loops that are bigger than Earth.

These experiments, along with many others, should provide a better understanding of the Sun’s mysterious corona.

More about the eclipse tomorrow.