Three small, rocky worlds put in an appearance this evening that makes them look more impressive than they really are. They’re low in the west as twilight fades away.

The brightest member of the trio is also the smallest: the Moon. It’s a beautiful crescent right now, with sunlight illuminating just five percent of the hemisphere that faces our way.

The Moon is a couple of thousand miles in diameter — roughly a quarter the size of Earth. It probably consists of a small iron core surrounded by thick layers of lighter rock.

To the lower right of the Moon, look for Mercury, which looks like a bright star.

At about three thousand miles in diameter, Mercury is the smallest planet in the solar system. But its core is massive — it accounts for more than three-quarters of the little planet’s diameter, and more than half its mass. Mercury may have been bigger in the distant past, with a thicker layer of rock around the core. But an impact with another body might have blasted away most of that material, leaving the core undisturbed.

Finally, look farther above the Moon for Mars. It’s the biggest of the three worlds by about a thousand miles. But it’s also the farthest, which makes it faint. It looks like a modest orange star.

Mars also has an iron core, although the iron is mixed with lighter elements. So even though Mars is bigger than Mercury, it’s less dense — a rocky planet with a difference. 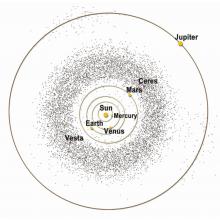