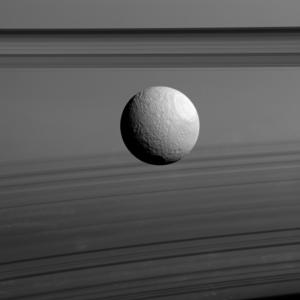 Tethys floats in front of Saturn and its rings in this view from the Cassini spacecraft. The small moon's most prominent feature is Odysseus crater (bright circle at top right), which makes Tethys look like the death stars of Star Wars fame. Saturn's rings form horizontal bands above Tethys, and cast curved shadows on Saturn itself (below Tethys). [NASA/JPL/SSI]

If you put a bottle of water in your freezer and leave it for a few hours, it’s likely to shatter. That’s because, unlike other liquids, water expands when it freezes.

One of the moons of Saturn may have cracked for the same reason — water inside the moon froze, expanded, and created a crack that goes almost three-quarters of the way around the moon.

Tethys is about 650 miles in diameter — less than a third the size of our own moon. It’s made mainly of ice.

Long ago, a big asteroid or a small moon slammed into its surface, blasting out a huge crater, known as Odysseus. The crater is so big that the impact probably would have pulverized a solid body. The fact that Tethys survived the collision suggests that it had a liquid or slushy interior when it was hit.

That liquid most likely was water. Tethys is so small, though, that it quickly lost its internal heat, so the water froze. As the ice expanded, it may have cracked the crust from pole to pole, creating the massive canyon known as Ithaca Chasma. It’s up to 60 miles wide and three miles deep.

It’s also possible that the canyon was created by shockwaves from the impact that carved Odysseus crater. But the two features appear to be different ages, lending credence to the idea that Ithaca formed as water froze inside this icy moon.

And Saturn is quite close to our own moon tonight. The giant planet looks like a bright star just to the lower left of the Moon at nightfall.