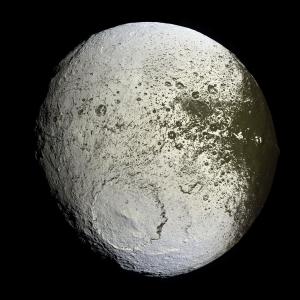 Saturn's moon Iapetus is one of the oddballs of the solar system. One hemisphere is almost completely white, while the opposite hemisphere is as dark as charcoal (part of the dark side is at the right of this image from the Cassini spacecraft). The bright side is coated with ice, while the dark side may be coated with material that was blasted off the surfaces of other moons, then swept up by Iapetus as it orbited Saturn. The moon is 912 miles (1,468 km) in diameter. The most prominent feature in this image is a 280-mile (450-km) impact basin at bottom. [NASA/JPL/SSI]

One of the moons of Saturn is the Jekyll and Hyde of the solar system, presenting two very different faces to the universe.

Iapetus is about 900 miles in diameter — less than half the size of our own moon. And it’s locked so that one side always faces Saturn, just as the same side of the Moon always faces Earth. That means that the same portion of Iapetus always faces forward as it orbits Saturn. And that may be responsible for its two-faced appearance: The leading hemisphere is almost as dark as charcoal, while the trailing hemisphere is quite bright.

The dark material may have been blasted off the surface of another of Saturn’s moons, and swept up by Iapetus. This dark material forms a layer that’s only about a foot thick. But it absorbs energy from the Sun, warming the surface. That caused ices below the coating to vaporize, darkening the surface even more. Some of the vapor then migrated to the opposite side of Iapetus, coating that hemisphere with fresh ice, making it brighter — giving the odd moon a two-faced appearance.

Look for Saturn close to the lower left of our moon as they rise late this evening. Saturn looks like a bright star. The true star Antares, which is about half as bright as Saturn, is a bit farther to the lower right of the Moon. You need a telescope to see Iapetus and Saturn’s other moons.