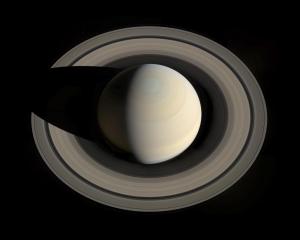 Saturn's beautiful rings encircle the planet in this image from the Cassini spacecraft, which is entering the final year of its mission. The rings are made of particles of ice and rock. They may be the shattered remains of one or more moons that ventured too close to Saturn and were pulled apart by the planet's powerful gravity. [NASA/JPL/SSI]

You don’t need gold or gemstones to make beautiful rings. Sometimes all you need are chunks of plain ice and rock — like the rings encircling the planet Saturn. Those rings are among the most beautiful features in the entire solar system.

The rings probably represent the remains of small moons. One or more moons may have spiraled too close to Saturn, where the giant planet’s gravity pulled them apart. Or two moons may have collided, blasting them to bits. Or perhaps both processes have been at work.

Today, the rings are renewed by some of Saturn’s moons. Big chunks of ice and rock slam into their surfaces, blasting out debris. And the moon Enceladus squirts geysers of water and ice out into space, resupplying one of Saturn’s more distant rings.

Moons also keep the rings in place. Several small moons orbit inside the ring system. Their gravity herds the bits of ring material like a sheepdog guiding its flock.

Over time, some of the material may coalesce to form new moons. But collisions or Saturn’s gravity may rip them apart again — creating new rings for this giant planet.

And Saturn is in good view tonight. The planet stands close to the left of the Moon as night falls. It looks like a bright golden star, with the rings adding greatly to its luster. Any telescope will reveal the rings — beautiful bands made from the most ordinary materials.

We’ll talk about the Moon and another bright planetary companion tomorrow.