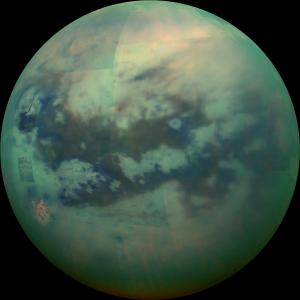 A patchwork of images from the Cassini spacecraft shows the surface of Titan, the largest moon of Saturn. An orange hydrocarbon smog tops the moon's cold, dense atmosphere, blocking the surface from view of optical telescopes and cameras. But Cassini's infrared and ultraviolet cameras, as well as a radar system, peer through the smog. They have revealed lakes and seas near the north pole, deep riverbeds, mountains up to two miles high, huge dune fields (the dark regions in this infrared image), and other features. At Titan's frigid surface temperatures, the lakes and seas are filled with liquid ethane and methane, which also carved the riverbeds. [NASA/JPL/Univ. Arizona/Univ. Idaho]

If you’ve ever looked at a distant skyline on a smoggy day, you can understand the challenge of studying Titan, the largest moon of the planet Saturn. A layer of orange smog tops its cold, thick atmosphere, hiding the surface from view.

Over the last decade, though, scientists have had a set of eyes on Titan that can tune out the haze and see the surface. And they’ve recorded some amazing sights, including lakes and seas and tall mountains.

The eyes belong to the Cassini spacecraft. Its instruments can view Titan at wavelengths of light that penetrate the smog. Over a series of many close encounters, that’s allowed scientists to piece together a detailed picture of the big moon.

They’ve found that lakes and seas cover about two percent of the surface, for example, mostly around Titan’s north pole. The largest are as big as some of the Great Lakes here on Earth. And a recent analysis found that one of them is filled with methane — a substance that’s in liquid form only because Titan’s surface is extremely cold.

Mission scientists also reported that they’ve identified the tallest mountain on Titan, towering almost 11,000 feet high. It hints that something is going on in the ice below the surface that’s similar to the motions of molten rock below Earth’s crust. But that process is hidden from view — even from Cassini.

Saturn looks like a bright star quite close to our own Moon this evening, with Titan visible through good binoculars or a telescope.