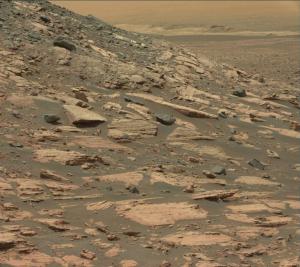 The Mars Curiosity rover snapped this picture on Februay 10 as it continued its ascent of the flanks of Mount Sharp, the central peak of Gusev Crater. It is looking downslope, toward the crater's floor. The rover's observations have shown that this region of Mars was much warmer and wetter in the distant past. [NASA/JPL/MSSS]

That excursion is reinforcing the idea that early Mars was much warmer and wetter than it is today. In fact, conditions on the planet could have been fairly hospitable for life. Alas, there’s no hint of life itself in the rocks — only hints that if life existed, it could have been comfortable on the young planet.

Recently, for example, Curiosity found minerals containing boron. Here on Earth, such minerals form in a wet environment, in temperatures that are comfortable for life. The rover also found fairly high concentrations of clays and a mineral called hematite — both of which form in water.

Liquid water, energy, and the right chemistry are necessary ingredients for known life forms. And Curiosity is showing that all of those existed on Mars in the distant past — discoveries made by climbing through time on a Martian mountain.

And Mars forms the top point of a skinny triangle in the sky this evening. It’s well above the crescent Moon, and looks like a moderately bright orange star. The much brighter planet Venus, the brilliant “evening star,” stands closer to the upper right of the Moon.

We’ll have more about this evening trio tomorrow.