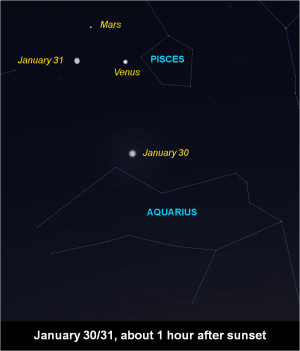 The Moon scoots past Venus and Mars in the early evening sky on January 30 and 31. Venus is the brilliant "evening star," so it is quite easy to see. Mars is much fainter, but its proximity to Venus helps it stand out.

The two planets that bracket Earth as it orbits the Sun perch above the Moon this evening. Venus is the brilliant “evening star.” Fainter Mars is close to the upper left of Venus, and looks like a modestly bright orange star.

Earth is the third planet from the Sun. Venus is the second planet out, while Mars is the fourth.

On average, there’s about a 75-million-mile span from the orbit of Venus to the orbit of Mars. On the astronomical scale, that’s not much. Yet it’s enough to make a huge difference in the habitability of the three worlds.

When Venus was young, it might have been relatively Earth-like, with oceans of liquid water on its surface. Venus was so close to the Sun, though, that the water soon boiled away. That triggered a runaway greenhouse effect that turned Venus into an inferno. Today, it has a dense carbon-dioxide atmosphere, and surface temperatures of 860 degrees Fahrenheit — one of the most inhospitable places in the solar system.

When Mars was young, it probably was fairly warm and wet as well. But its weak surface gravity couldn’t hold on to its water, so much of it leaked out into space. Today, the Martian atmosphere is thin and bitterly cold. So Mars is more comfortable than Venus, but still not especially inviting.

And in the middle, there’s Earth — at just the right distance from the Sun for liquid water at the surface, and enough heft to hold on to it — the coziest planet in the solar system.